No items found.
browse products
Product is not available in this quantity. 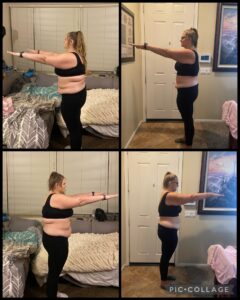 “One night while I was in college, I was about to go to Taco Bell with my bestie but minutes later realized I wanted a change so we did not go. I had also made a promise to myself that I would not gain “the freshman 15” that everyone warns you about before going away to college. Since I wanted to change my life for the better, I told her that we should start going to the gym and eating healthier every day. This decision was not totally random, but the realization did hit me out of nowhere that night. Some of my reasons for deciding this were because I wanted to become the best version of myself, I wanted to gain more self confidence, and I wanted to love myself more. After about a month of changing my eating habits and making the gym a priority, I reached out to Jes. Even with the distance between California and Oregon, she helped me get on track even more, and I have been working with her ever since. I achieved one of my overall goals and did not gain “the freshman 15,” instead I lost about 30 pounds before coming home for the summer, and I told myself that I was going to keep going because this is not a temporary change, it is now my lifestyle. Since then, I have lost another 30 pounds during the summer.Losing 60 pounds overall! Along my journey, the gym has not just been a place that I workout, it has also become an outlet for me and is my happy place. My goal weight is not a number on the scale, but a feeling and an image in my head and I will get there. This is only my progress as of now, I am not done yet! Just remember that consistency is key, progress takes time, and you can do anything you set your mind to!”

Thank you! Your submission has been received!
Oops! Something went wrong while submitting the form.
Facebookinstagram